Keep A Package From Updating In Ubuntu, Debian Or Linux Mint [APT]

Keep A Package From Updating In Ubuntu, Debian Or Linux Mint [APT]

There are multiple ways of preventing a package from updating in Debian, Ubuntu, Linux Mint, elementary OS and other Debian/Ubuntu-based Linux distributions. This article presents 3 ways of excluding repository packages from being upgraded.

Why prevent a package from being updated? Let's say you install a package that's older than the version available in Debian, Ubuntu or Linux Mint repositories, or you know some update is causing issues, and you want to upgrade all packages minus one (or two, three...).

Here's an example. I'm using Chromium browser with hardware accelerationpatches from the Saiarcot895-dev PPA, in Ubuntu 18.10. To get hardware acceleration to work with Nvidia drivers, a patched vdpau-va-driver package is needed, and this is not yet available in this PPA for the latest Ubuntu 18.10. Luckily, the Ubuntu 18.04 package can be installed in Ubuntu 18.10, but any upgrade through "apt upgrade" or using the Software Updater will upgrade this package, which I don't want. So in this case, holding this package from upgrades would allow me to upgrade all other packages without having to worry about it.

It should be noted that preventing a package from future upgrades may cause issues in some situations, if the package you're holding is used as a dependency for another package that can be upgraded. So try not to prevent too many packages from upgrades, especially libraries.

Here are 3 ways of preventing a package from updating in Debian, Ubuntu, Linux Mint.

Synaptic Package Manager, a Gtk graphical package management program for apt, can lock packages which prevents them from being updated.

It's important to note that using Synaptic to lock packages won't keep them from being updated from the command line - running apt upgrade or apt-get upgrade will still upgrade a package locked in Synaptic. Locking packages in Synaptic will prevent package upgrades using Ubuntu's Software Updater app, and possibly other graphical package managers. It will not prevent updating packages using the Linux Mint Update Manager application though. As a result, I recommend using apt-mark or dpkg (see below) to keep packages from updating.

You can install Synaptic Package Manager using this command:

To prevent a package from updating using Synaptic, search for it, select the package and from the Synaptic menu click Package -> Lock Version: 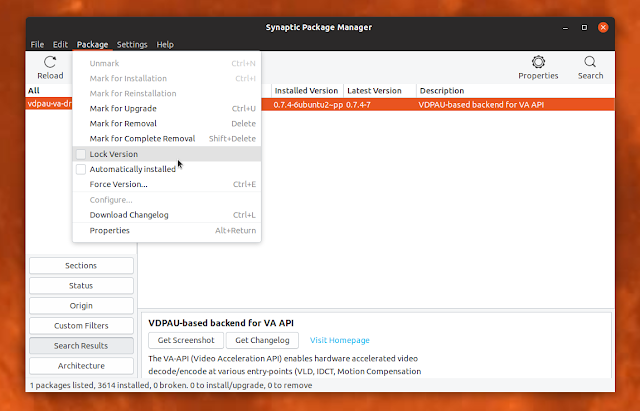 In the same way you can unlock the package too.

To see all locked packages in Synaptic, click Status in the bottom left-hand side, then click on Pinned above the Status section: 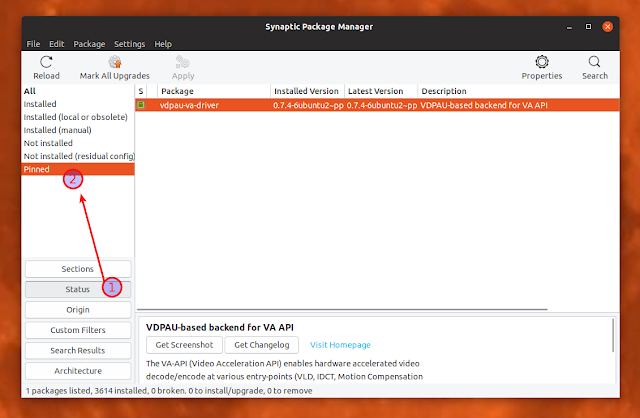 You can hold a package from future upgrades (and from being automatically removed) with apt-mark by using this command:

Replacing PACKAGE with the package you want to hold from updating.

You can check which packages marked as hold by using:

To remove a hold (so the package can be updated), use:

For both hold and unhold you can specify multiple packages, just like when installing software with apt (separate the packages by a space).

A while back there were some graphical package managers that ignored the apt-mark hold status. I'm not sure if that's still the case, but just to be safe (and in case you're using an old Debian / Ubuntu / Linux Mint version), here's another way of preventing package updates in Ubuntu, Linux Mint or Debian: dpkg.

To prevent a package from upgrades using dpkg, use:

You can see all package holds using this command:

To remove the hold (allow the package to be upgraded), use:

Unlike apt-mark, this solution doesn't allow specifying multiple packages at once.

Make sure you enter all the required information, indicated by an asterisk (*). HTML code is not allowed.