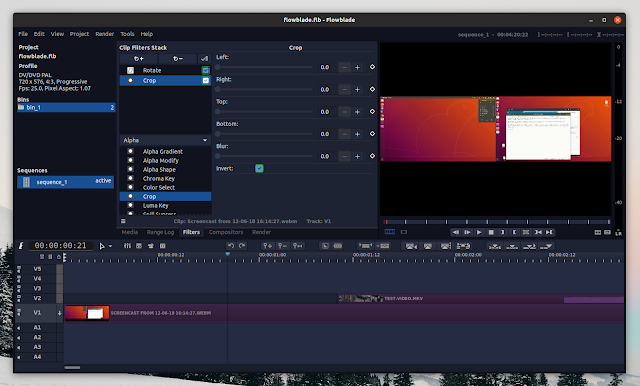 Flowblade, a free and open source video editor for Linux has had a major release, with important changes too its timeline editing workflow, new tools, and a new custom dark theme.

Flowblade features editing tools like move or trim, image compositing with 10 compositors and mix, zoom, move and rotate animations capabilities, image and audio filtering (with 50+ image filters and 30+ audio filters), built-in title tool, G'MIC effects tool, to name just a few of the things this tool can do. The video editing software supports most video and audio formats, depending on installed MLT / FFmpeg codecs.

In previous versions, Flowblade used a film-style insert editing model as its default workflow, which was found somewhat unintuitive by some users, while others found it efficient and clean. To solve this, Flowblade 2.0 introduces a configurable workflow, which allows the user to tweak the application, with two workflow presets being shown when the application first starts, from which the user can choose:

Flowblade 2.0 also includes some user interface updates aimed to clean up and modernize its design. For this, a new custom dark theme was created and made default, while some UI elements, like the panel, have been updated. Users can change to a regular dark or light theme, from the Flowblade preferences.

Also, the Overwrite tool name has been changed to Move.

Besides the new Keyframe tool, keyframe editing has received some other updates as well, including slider to keyframe editor functionality, or buttons to move keyframes 1 frame forward or backwards.

With the 2.0 series, Flowblade will continue to use Python 2, with the plan being to switch to Python 3 with the Flowblade 3.0 release.

The complete Flowblade 2.0 release announcement can be found here.

Make sure you enter all the required information, indicated by an asterisk (*). HTML code is not allowed.